Welcome to the WHERE-NS blog!

This project is led by the Ecology Action Centre (EAC), based out of Kjipuktuk (Halifax, NS). WHERE-NS is a feasibility study, with the goal of creating a business case for panelized Deep Energy Retrofits (DERs) that lead to improvements for low-rise, affordable housing. The project is funded by the Low Carbon Communities Grant program, Nova Scotia Department of Energy and Mines.

In Canada, we have a long history of excellence in building science and energy conservation. It started back in the 1970s with organizations like the Saskatchewan Research Council digging into energy conservation to counter the embargo by OPEC nations that sent oil prices soaring. The Saskatchewan Research House was an amazing experiment that was the precursor to the R-2000 program, and many years later, became the template for the PassivHaus standard.

So we know a lot about how to build new houses that are very energy efficient. The National Building Code, which the NS Building Code is based on, has a whole section on energy conservation measures that MUST be included in new construction. That’s great, but new construction represents a very small fraction of the housing stock. Here’s why that matters:

In Canada, we have over 14.5 million existing homes.

New construction adds about 100,000 a year to that total.

Housing is responsible for about 14% of all energy use and 11% of GHG emissions in Canada.

In Nova Scotia we have a perfect storm of old houses, high energy prices, lower median income, and a growing fixed-income population. Energy security is a big concern. Some Nova Scotian statistics:

With half of our houses heated with oil, and with coal or oil providing the energy for 60% of our electricity, Nova Scotian households have a high carbon intensity. According to Canada’s Energy Regulator, in 2019, the average GHG intensity for electricity generation in NS is 600 gCO2 per kWh, the fourth-highest carbon intensity among the provinces. Here’s how our fuel source by household breaks out. 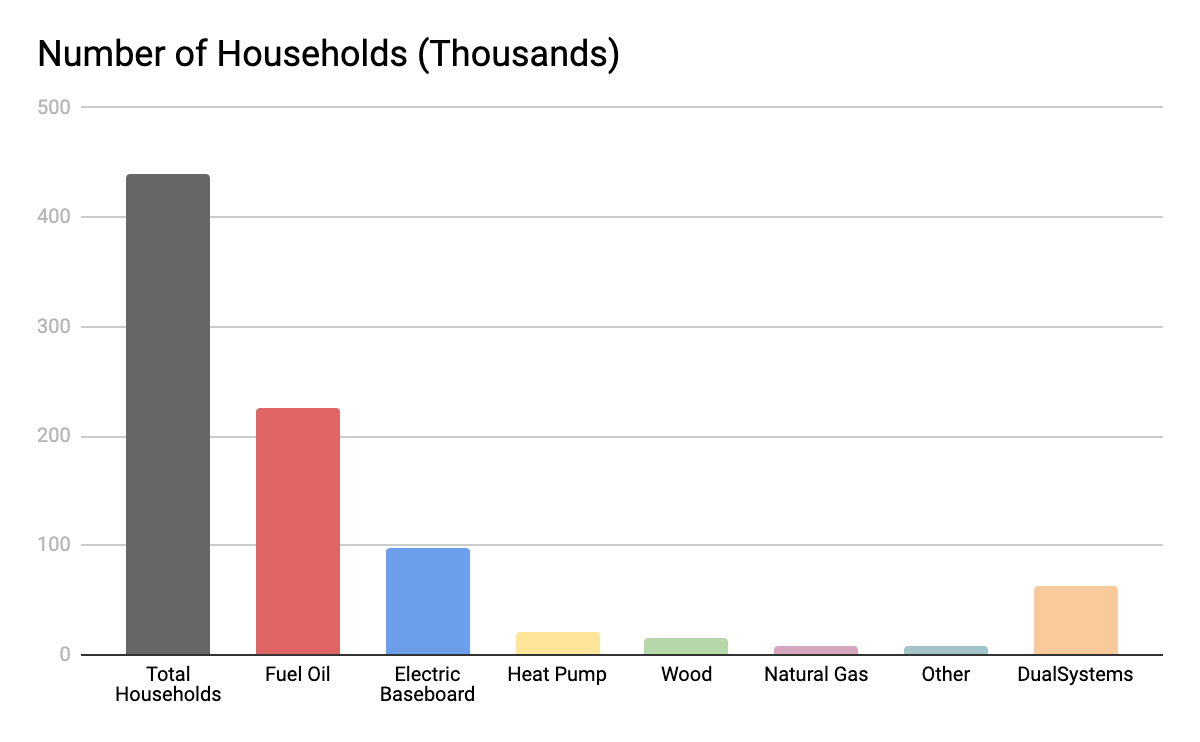 We do a lot of retrofits in the province, and Efficiency NS has had consistent and strong incentives in place over the years to help people carry out energy conservation measures on their houses. We are however, in the same boat as the rest of the country in losing opportunities to carry out more, deeper retrofits by not having region or community-wide ‘aggregated’ energy conservation retrofit programs. This is where there is an organized and coordinated effort to bring many buildings to an energy conservation target.

Here’s the problem: we keep doing project-by-project retrofits. One-off projects are more expensive than ‘bulk’ projects that can take advantage of repetitive construction processes. Contactors are constantly reinventing the wheel, and poor practices lead to unintended consequences that can damage the building and negatively impact occupant health and safety.

That’s changing, though. We have some great technical folks working on a Canadian version of the exterior renovations that are the hallmark of EnergieSprong in the Netherlands (see this blog post for more), leading to Net Zero Energy retrofits using prefabricated wall panels, insulated rooftops, and smart heating/cooling/ventilation systems.

Since 2016, Natural Resources Canada has funded the Pre-Engineered Exterior Retrofit (PEER) Program. The project has three areas of focus:

Two wall panels were built as proof of concept: a rigid foam ‘nail base’, or SIP style panel and a ‘standoff 2x wall system filled with cellulose insulation. These two wall prototypes were built and installed on a construction trailer in 2017, and have been monitored since. PEER is ongoing through 2021, with more analysis of the monitoring data, and supporting two demonstration projects. A design guide is also being produced.

There are two demonstration projects that are associated with PEER. The first is with Ottawa Community Housing using a nail-base panel, a completely new roofline, and a goal of Net Zero. The second is with Sundance Housing Cooperative in Edmonton, with a wood-framed stand-off wall and upgraded roof/foundation insulation.

WHERE-NS will benefit from lessons learned through PEER and the demo projects, and building on the work that these and other projects and initiatives that are happening in Nova Scotia and across the country. Some of the challenges identified include:

Blog 3: Getting to Net Zero Energy

A Net Zero Energy (NZE) building is one that produces as much energy in a year as it consumes.

To reach those low energy consumption levels, a NZE building usually has high insulation values in the building envelope, meaning there’s a really good cozy sweater around it. But you can’t stop there. The building envelope also needs an air barrier to stop the wind moving through the sweater. I’m not sure who first came up with that analogy, but it’s been in print since at least 2012. I will update this article if I find out.

This is where the ‘whole house upgrade’ comes in: you have to consider all the aspects of building science to make sure while you’re working on the energy conservation part of things, you don’t lose track of occupant health and comfort, as well as the effectiveness of the space conditioning systems.

Once you’ve improved the envelope, you then focus on right-sizing the space conditioning systems, designing the distribution system properly, and ensuring that you have adequate ventilation.

OK, so what is Net Zero Energy Ready?

A building is brought to a Net Zero Energy (Ready) target in exactly the same way as a NZE building: by reducing the space conditioning loads (heating, cooling and ventilation) dramatically from conventional construction.

Net Zero Energy (Ready) is often abbreviated to NZE/r, so let’s go with that from now on (sidenote: in the US, the term is often turned around to Zero Energy, or Zero Energy Building - means the same thing).

Retrofitting to NZE/r in Canada

There’s a different approach to NZE/r in existing buildings than there is with new construction. You have to work with what you’ve got, or around what you’ve got. This means there’s more challenge in planning, costing, and carrying out the project.

The thing you cannot change is the roof shape, size, and orientation. So that’s going to be your prime limiting factor.

Let’s say there is 600 s.f. of roof area available with a good solar aspect, you can put 600 s.f. of PV panels on the house, that’s just under half of the total roof area for an average house.

What does that translate into in terms of energy production over the course of a year?

On average, in Canada, we can count on about 1130 kWh per installed kiloWatt(1130 kWh/kWc) of capacity annually. Hold onto that figure. That will let us know how much production we can expect (as a back-of-the-napkin exercise) from each kiloWatt of PV we install.

Now we need to translate how many kilowatts of PV capacity we can install on our 600 s.f. of roof. We can use a nice middling number for our general example: an average PV panel equals 15 Watts/s.f. So here’s the math:

Let’s put that in perspective:

In 2014, according to the National Energy Use Database (NEUD), the average Canadian household used 11,135 kWh of electricity per year. That’s an average of all houses, electrically heated, oil, and gas heated. Houses with electric baseboard heating use much more than this, oil and gas heated houses use much less. A NZE/r strategy for space conditioning is often all-electric, with a heat pump to reduce the heating and cooling load through efficiency.

More perspective. You want to drop those energy loads as much as you can, because a 9kW PV system, even at $3/Watt installed, is going to cost you $27,000.

Blog 2: What do you mean, EnergieSprong?

The challenge is to scale up whole building exterior energy upgrades using special panelized wall systems so that we can carry out hundreds or thousands of them quickly and cost-effectively. One-by-one exterior retrofits are labour-intensive, and interior gut-rehabs are few and far between.

That’s where the Dutch Energiesprong program excels. They created a panelized insulated wall system that gets attached to the existing building. Within 5 years, EnergieSprong has retrofit over 5,000 units, cut their price tag in half, and found efficiencies that have dropped their site time to less than 7 days, minimizing the impact on the occupants. The EnergieSprong model combines social housing providers, the construction industry, the financial sector, and regulators as well as municipalities and cities. Innovations have expanded: the whole process is computerized, fabricated in factories, and new mechanical systems are integrated into the whole retrofit project, and they have moved to Net Zero Energy as their goal. The plan is to complete 110,000 retrofits in the coming years.

What are the advantages of a panelized approach?

Why it works in the Netherlands/EU

There is a large social housing network. Those tightly packed cities have only a few archetypes and many copies. Tight geographic areas with high densities mean that centralized manufacturing works. It’s effective, efficient, and takes a huge amount of risk out of the process.

There are some significant differences between Canada and the Netherlands in terms of housing stock, density, and  geographic situations.
We have many archetypes and few copies, we’re geographically diverse and dispersed, social housing is not the norm, we have limited central manufacturing options because of our geography. Also, we don’t quite yet get the idea of social enterprise. Not all the same players are on board in Canada. At least not yet!

In Canada, housing accounts for more than 14% of all energy use and more than 11% of total greenhouse gas emissions.

In Nova Scotia, half of our housing stock was built before 1970. Half of our housing stock uses oil for space heating. In addition, more than 60% of our electricity is generated by coal and oil. We have high energy costs and high carbon intensity. We can make great improvements in our older housing stock, right down to Net Zero Energy (a building that produces as much energy in a year as it consumes).

This project focusses on exterior retrofits for affordable housing in Nova Scotia. There are over 9,000 social housing units in the province. Carrying out significant energy conservation measures on these units over the next 12 years could result in $15.25 million in household savings.

Retrofits that reduce energy consumption and reduce carbon loading are getting a lot of attention in 2020, along with green ways to recover from COVID. Improving the social housing units in Nova Scotia could account for nearly $8 billion in full-time employment.

The challenge is that retrofits are now mainly done as ‘one off’ projects, making them costly both in terms of labour and materials, but also in terms of time frame. If we are to successfully make changes that can reduce the impact of climate change, we need to do it quickly, and at a large scale.

That’s the point of WHERE-NS. Panelized exterior retrofits that can be done quickly, with a model for doing many of them. In addition, an exterior energy retrofit means that we can  improve the energy performance of existing buildings while keeping the occupants in their homes.

In addition to energy conservation and carbon reductions, there are non-energy benefits to deep energy retrofits:

There are actually  two projects on the go in Nova Scotia right now that are focussed on improving energy security and decreasing carbon loading in multi-unit residential buildings. Both are based on and inspired by EnergieSprong, an exterior energy upgrade initiative that came out of the Netherlands.

The second project is ReCover,  a collaborative and knowledge sharing initiative to develop a way to improve thousands of homes, starting out with a plan to upgrade a multi-unit residential building on the Halifax peninsula to the level of Net Zero Energy-ready standards. Phase 1, the feasibility study, is led by QUEST and funded by the NS Department of Energy and Mines. The first ReCover project should be completed by the end of 2020.

WHERE-NS will be able to take some of the lessons learned by the ReCover pilot and incorporate them into the business case for affordable housing in NS.

In the next article, we’ll talk about the international and national inspirations for WHERE-NS.