A just and vibrant world of respect, belonging and ecological resilience.

The Ecology Action Centre acts as watchdog, convener, mobilizer and incubator. We engage community to create systemic change in the face of urgent, complex environmental issues.

We are creative, resilient, fierce and caring. We value relationships. We act with integrity. 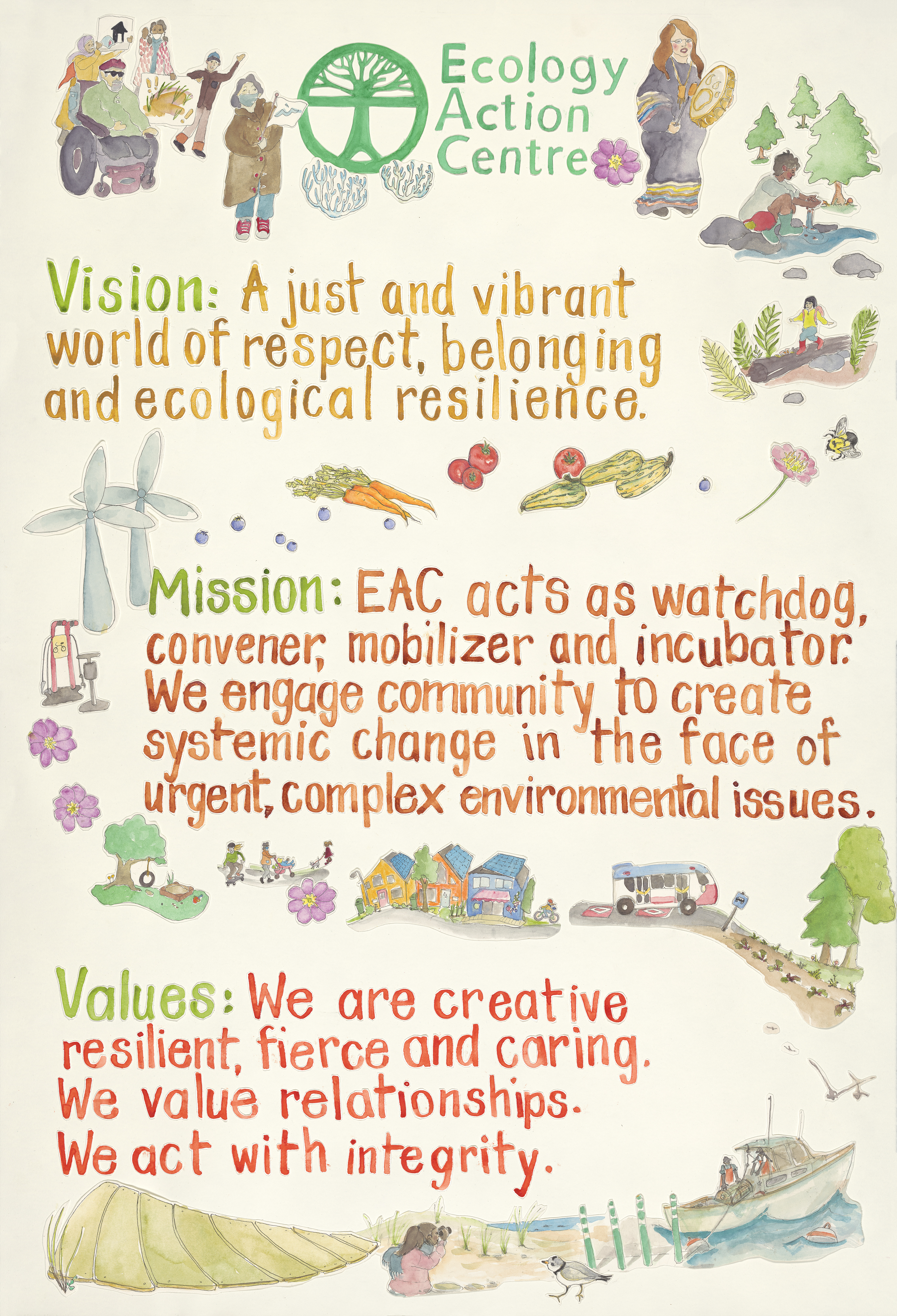 This is the third strategic plan in EAC’s history. Our original objective for the plan when we started the process in June 2016 was to “develop a practical and cohesive description of how we work, what we’re good at and what we will focus on so it can inform and improve our work and provide inspiration.”

We embarked on a collaborative process to develop the plan, engaging our board members, staff and volunteers for input along the way.

By March 2017, we arrived at a set of three strategic priorities, with specific objectives and action plans for each, intended to guide the organization for the coming 5 years. We hope it will inform, inspire and improve our work by helping us be more integrated across action areas, helping us focus on what’s most important and what we are good at, and strengthening our ability to share EAC’s story and successes. 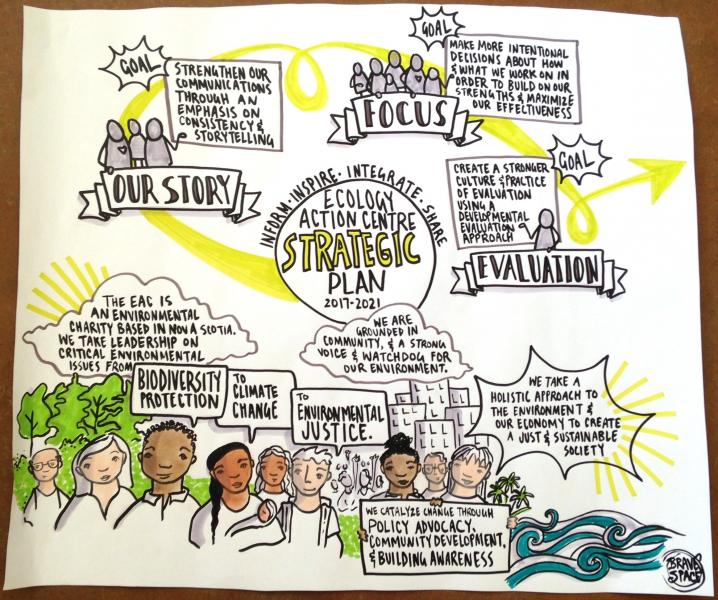 Diversity in this context refers to human difference. Each person is unique, yet we are often identified in groups that are perceived to have shared traits. These traits can be defined by gender identity, sexual orientation, race, religion, interests and countless others. Just as diverse species make for a healthy ecosystem, diverse humans make for a healthy workplace. At the Ecology Action Centre, we value that diversity tremendously because it makes us a stronger, more effective, more just and more interesting organization.  Read more about our Climate Justice and Diversity Vision and Values below.

What is climate justice?

Our global society distributes wealth and resources unevenly, based on class, gender, ethnicity, race, orientation, identity, religion and geography. As a result of this, certain people’s lives and livelihoods are unjustly valued more highly than others’. At the same time, large fossil fuel companies are often given an unfair level of power and influence in political, economic, and social decision making.

People who are affected by these decisions, however, are often excluded from influencing them. This difference in power is one of the main causes of climate change, and it is also a major barrier to climate solutions. Therefore, at the same time as we are working to address climate change, we must also address the inequality and injustice in our societies. Inequality, injustice, vulnerability to the impacts of climate change, the power to protect yourself, your family or community from its damaging effects and the power to influence policies to mitigate its effects are not separate issues, but deeply connected, and must be addressed together. This is what it means to work for climate justice.

Indigenous people, people who receive a low income, racialized people, people with different physical abilities, children and elderly people, people of certain religious beliefs, women, people living in socially or geographically vulnerable places, people living subsistence based lifestyles and future generations will be particularly affected by impacts of climate change, such as drought, floods, extreme weather events and reduced food and water security. As these defining features are often overlapping and compounding, certain people and populations can be vulnerable to climate change in different ways.

Social justice is as much a pillar of confronting climate change as are scientific understanding, ecological awareness, Indigenous ways of understanding, behavioural and technological solutions and environmentally sensitive public policy.

The Ecology Action Centre confronts climate change every day with its projects and campaigns. By working for climate justice, we address the need to recognize and incorporate social justice issues and action into all our efforts.  In this way, we aim to counter the social injustices created by climate change and mitigate the effects of climate change in ways that also promote and enhance social justice.

We are committed to working for climate justice by:

We recognize that many groups in Nova Scotia, especially Indigenous groups and grassroots organizations, are also working for climate justice. Our ongoing relationships with allies in anti-poverty and social justice movements provide many opportunities to learn, share guidance, and establish mutual values.

We are committed to seeking common ground with new and sometimes unlikely allies. We recognize that the Ecology Action Centre is uniquely positioned and privileged within the climate justice movement, and we are committed to using that unique position and privilege to make space for frontline voices that are often marginalized. We realize that as we do this work, points of disagreement and tension may arise between us and those with whom we seek to ally ourselves. The diversity within our communities is a source of strength and depth as we build a united movement for change.

Working for climate justice means implementing the solutions for the most pressing problems facing us as a society. In order to achieve this goal, we must build alliances and relationships across all sectors of society. We invite you to join us.

The spirit and intent of this statement was endorsed by the membership of the Ecology Action Centre at its 45th Annual General Meeting on July 27th, 2016.

Diversity in this context refers to human difference. Each person is unique, yet we are often identified in groups that are perceived to have shared traits. These traits can be defined by gender identity, sexual orientation, race, religion, interests and countless others. Just as diverse species make for a healthy ecosystem, diverse humans make for a healthy workplace. At the Ecology Action Centre, we value that diversity tremendously because it makes us a stronger, more effective, more just and more interesting organization.

Human diversity is one of EAC’s core values, and links to a healthy and sustainable Nova Scotia. EAC is an independent environmental non-governmental organization that strives to work with partners to:

It is recommended that EAC adopt and publicize widely a Vision of Diversity, to be included in the EAC’s Code of Conduct. This vision statement will clearly state our values with respect to human diversity, as given below. Such a vision statement is needed so that our staff, volunteers, members, board members and the general public understand and take ownership of the fundamental importance EAC places on diversity and equity. For diversity and equity to become a mainstay of EAC’s organizational culture these must become part of the organization’s vision and mission.

EAC envisions a Nova Scotia where all people work together to preserve and protect the environment in which we live. Toward this end, EAC staff, volunteers, members, board members and committee members will engage in honest, open, respectful dialogue with all people, including traditionally under-represented groups, to achieve common goals. EAC will recognize the importance and value of diverse sets of values, needs and perspectives.

EAC will strive to recognize and embody the following Diversity Values: