Estimates indicate that Nova Scotia will more than double electricity generation by 2050. The heating and cooling of buildings, increased use of data stored in the “cloud”, and growing interest in electric vehicles are just a few examples of why demand will rise. This awareness compels us to explore options for clean, reliable and affordable energy. We must prevent further damage to our shared environment.

Fortunately, opportunities exist that point the way toward a more energy efficient future.

Our 2019 report Accelerating the Coal Phase Out: Nova Scotia and the Climate Emergency charts the path for a low-carbon electricity system in Nova Scotia. It proposes a scenario that leads to 90 per cent renewable electricity, a complete phase-out of coal power, and significant increases in energy efficiency and electric transportation – all by the year 2030. This report is the first of its kind in Atlantic Canada and demonstrates that phasing out coal in Nova Scotia is possible, timely, and necessary.

We commissioned Torrie Smith Associates to author this report. Click here to read the report summary.

The Federal government’s analysis has shown that phasing out coal electricity in Nova Scotia by 2030 would avoid 89 premature deaths, 8,000 asthma episodes, and 58,000 days of breathing difficulty for Nova Scotians, among other benefits. Unfortunately, coal-fired electricity remains our province’s single largest electricity generation source. It’s also our largest single source of greenhouse gas emissions. Continuing to reduce our dependence on coal and transitioning to a fossil-free electricity system are the keys to positive change.

To assist in highlighting clean electricity supply scenarios and demonstrating possible pathways to decarbonize the Atlantic region by 2050, the EAC commissioned EnviroEconomics and Navius Research to author a technical and modelling report. That report entitled, Assessing Net-zero Electricity Supply and Demand Models in the Atlantic Loop, was released in May 2022.

This report models various net-zero and Atlantic Loop scenarios. It also demonstrates a rapid decline in emissions for both Nova Scotia and New Brunswick in the net-zero simulations, which is attributed to the coal phase-out targets. 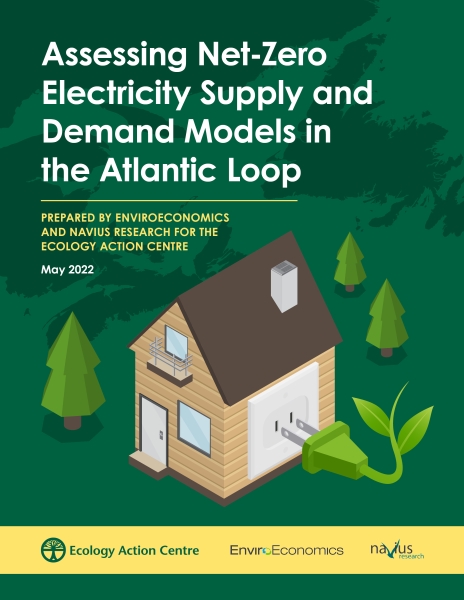 Watch a panel discussion on our Atlantic Loop report below.

We've highlighted and discussed various clean electricity supply scenarios to decarbonize Atlantic Canada by 2050. The report is a part of our Atlantic Vision for a future where electricity is affordable, reliable and sustainable.

We are more informed and better prepared to prioritize clean, affordable, and reliable electricity now than ever before. This starts with a legislated sustainability mandate that gives clear prioritization of environmental and social outcomes to the Nova Scotia Utility and Review Board using a three-pronged approach:

Other jurisdictions have moved in this direction, and it is time Nova Scotia followed.

Transitioning from fossil fuel–powered electricity to clean, renewable sources is the foundation for many policies needed to effectively address the climate crisis. The Ecology Action Centre commissioned Torrie Smith Associates to author a technical and modelling report as to what an electricity grid with more than 90% renewable electricity, and a complete transition away from coal-fired electricity generation by 2030, would look like in Nova Scotia.

This report - Accelerating the Coal Phase Out: Nova Scotia and the Climate Emergency – proposes a solid path forward for coal phase-out, with numerous options including:

Shifting to 100 per cent renewable electricity is possible. It’s also better for our health, the environment and affordability. With our electricity sector poised to double by 2030, a change from coal, one of the most polluting forms of energy worldwide, is critical to meeting our climate targets.

Electricity is present in almost all aspects of modern life. It’s nearly impossible to imagine our day-to-day existence without it. But how much do we really know about our electricity systems and our power as citizens to shape them?

As Nova Scotia’s electricity demands increase, our need to transition to renewable energy becomes more urgent. It’s important for us all to know how to affect change in our systems to help move our province toward clean, reliable and affordable energy. This transition is possible, and it has the power to make our lives better now and for future generations.